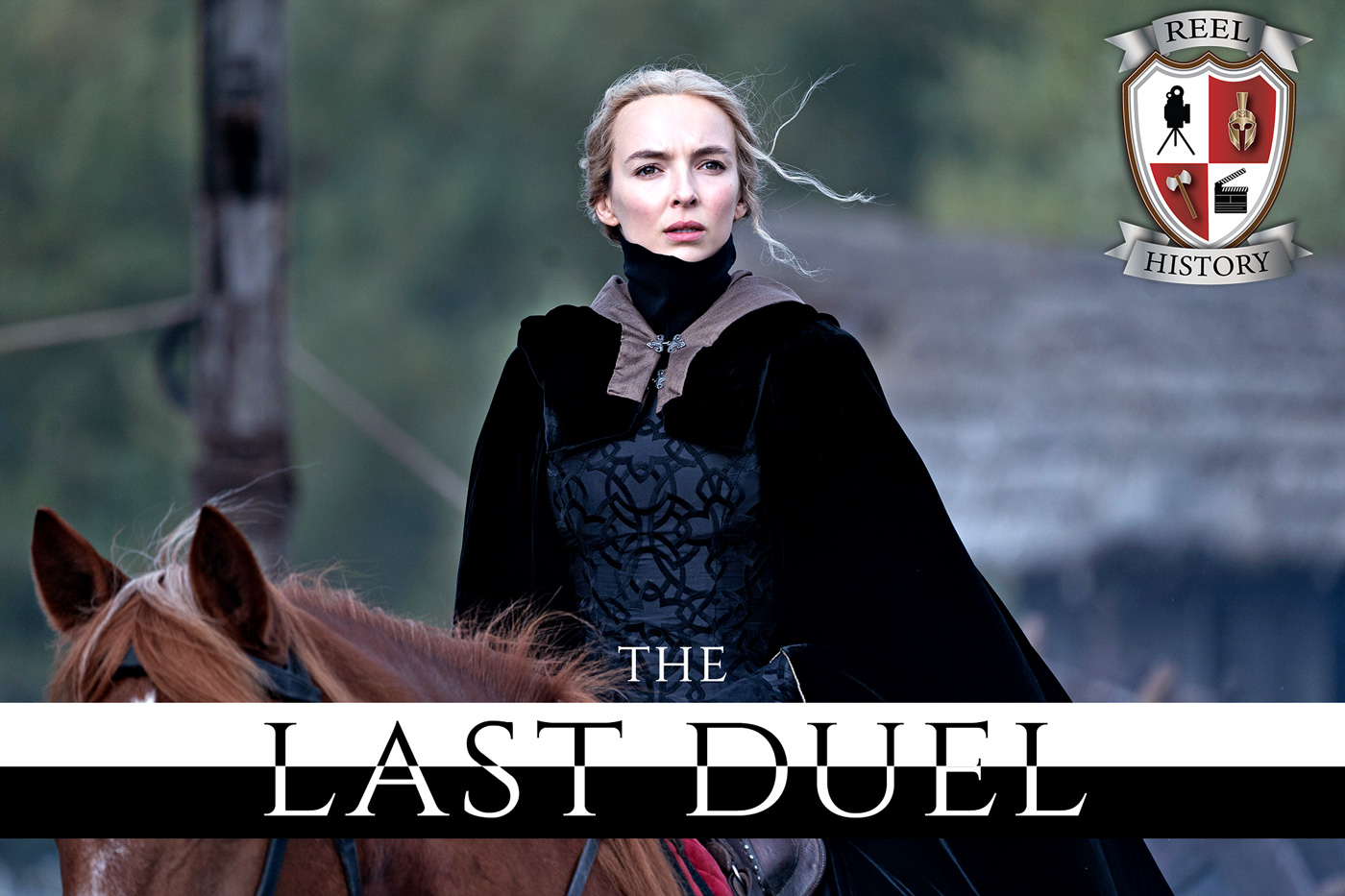 Lances at the ready for episode 2 of season 3 of Reel History!

In this week’s journey into the mists of time, Michael struggles with his French pronunciation and hopes no one will notice as we muster our forces to give battle to 2021’s ‘The Last Duel’ (now streaming on Disney +). With Ridley Scott at the helm and a screenplay written in part by the Oscar winning duo of Ben Affleck and Matt Damon, this film seemed destined to fill post lockdown cinema seats everywhere.

Despite basking in a warm glow of critical success (85% rating Rotten Tomatoes), it has turned into a certified feudal flop at the ever-capricious box office. Why is anyone’s guess but as Mark says you can’t blame everything on Millennials, Ridley! Tune in to learn why we’re determined to right this wrong!

Set in 1386 in a feudal France ravaged by the 100 Years War, this film throws down the gauntlet by challenging the viewer to examine the story of the horrific rape of Marguerite de Carrouges (Jodie Comer) and its seismic consequences from the contradictory perspectives of three central protagonists. This leads to a bitter enmity developing between two old friends, Jean de Carrouges (Matt Damon) and Jacques le Gris (Adam Driver) that rocks the kingdom of Charles VI as Marguerites life (not to mention her eternal soul) hang in the balance. To end the stalemate, these two squires’ resort to the ‘Judgement of God’ in the form of a heart pounding duel to the death to establish the guilt or innocence of Marguerite and her attacker.

Join us to learn whether any of this happened as we pore over Eric Jager’s 2004 original source material. We turn a beady eye on the intensely hierarchal world of quarrelsome knights, squires, barons, and kings where the maxim ‘no lord without land, no land without a lord’ held sway. We examine the ancient origins of duelling before turning to the real lives behind the tale and learn how even medieval legal proceedings were drawn out tedious affairs! Along the way we balance both heavy and light topics covering everything from late medieval attitudes to rape, women’s rights (or lack thereof) to beliefs in enchanted weapons and curses. We learn of the hazards of being an out of shape knight and even find time to chat about a famous shirtless Irish trial by combat which we all agree needs to make it to the big screen!

Sources
• ‘The Last Duel: A True Story of Crime, Scandal and Trial by Combat’ by Eric Jager (2004)
• ‘A Great and Glorious Adventure: A History of the Hundred Years War and the Birth of Renaissance England’ by Gordon Corrigan (2013)
• ‘Agincourt: The King, the Campaign, the Battle’ by Juliet Barker (2006)