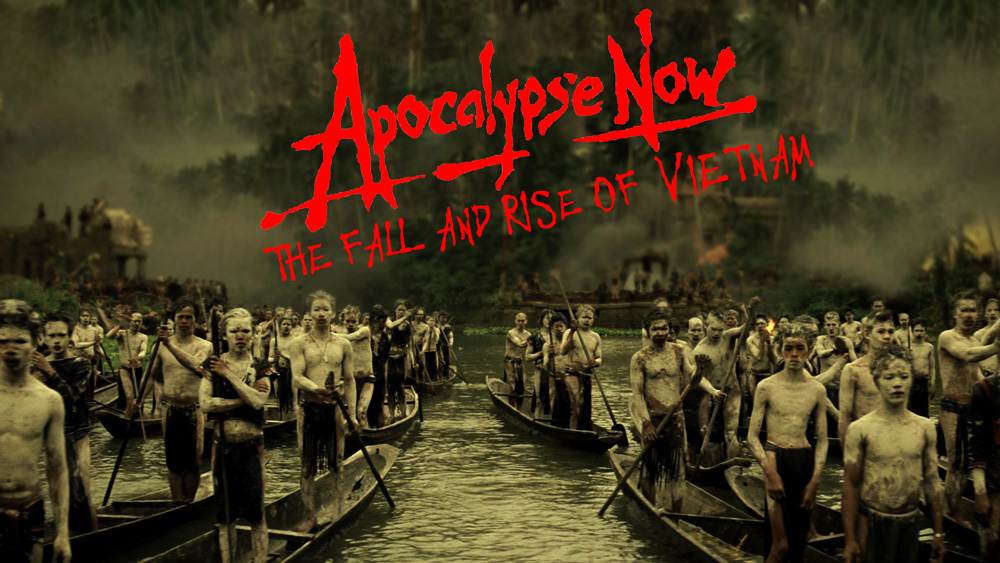 This ain’t no USO show so hold on to your cavalry hat and jump onboard a Huey for episode 8 of Season 3 of Reel History!

In a new departure, we’re delivering up our first double-barrelled episode in honour of Francis Ford Coppola’s Vietnam war masterpiece ‘Apocalypse Now’ (1979). There really was was just too much to squeeze into one episode and that’s even before we heard Michael struggle to pronounce the names of Vietnamese emperors 😊.

What started out with an infamously chaotic 3-year production (worthy of an episode in itself), this Oscar winner would blossom into an endlessly quotable critical and financial success! Packed full of memorable characters such as Lt. Colonel ‘Charlie don’t surf’ Kilgore; the chilling plot is loosely based on the anti-imperial novel ‘Heart of Darkness’ by Joseph Conrad. We find ourselves in stifling hot jungle, meandering down river in the unsettling company of veteran assassin Captain Willard (Michael Sheen) as he seeks to ’terminate with extreme prejudice’ the rogue and enigmatic Colonel Kurtz (Marlon Brando). But you knew that already so that’s why we did what we do and looked at the real history behind the film!

Join us for episode 1 of this 2-part special as we use the film as a catalyst to first examine how Vietnams tumultuous history forged the spear that would one day pierce the illusion of invincibility of a cold war superpower. To kick off, we will learn how this plucky country sprang from the Red River Delta to form a civilisation that would one day endure a millennium of Chinese occupation (beginning in 111 BC), only to later gain its independence and repel even the all-conquering Mongol empire in 1288.

We will then take you on a whistle stop tour of the preceding centuries as Dai Viet expanded south to form the modern S shaped Vietnam we recognize today. Fast forward to 1848 and it wouldn’t be long before the 2nd French empire and Napoleon the third cast a covetous eye on this rich and fertile land they imaginatively called Indochina! We’ll cover the gradual French conquest of Laos, Vietnam and Cambodia and the brutal colonial era it sparked. We will then sift through the embers of revolution to discover how Ho Chi Minh and the wider Viet Minh liberation front would triumph over not only a short-lived Japanese occupation but also a resurgent post war France determined to maintain it’s ‘gloire’ and prestige (1st Indochina War 1946- 1954).

Caught your breath? We hope so as all this happened long before anyone in Vietnam had even heard of President JFK, Lyndon B Johnson not to mention Henry Kissinger…. tune in for part 2 next time to learn what happened when they finally did!