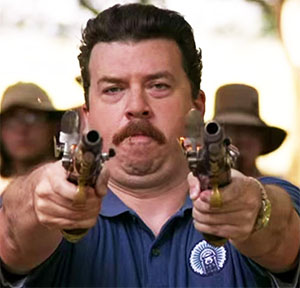 If you loved Eastbound and Down and have been holed up in a bunker on your own sovereign land patiently awaiting new episodes, this is the next best thing. Danny McBride and Jody Hill has put together a new show, this time tacking Vice Principals down from their high horse. The show also features typecast Southern racist Walton Goggins, and typecast mopey old guy Bill Murray. As a fan of Eastbound and Down, I welcome their new show with open arms as my TV has been lacking in the McBride and Hill flavor of style and comedy. Although don’t burn down your bunker and cash in your land yet as McBride set the proper expectations on the brevity of the new show:

“The whole series is only 18 episodes and that’s it. We just wanted to make a really long movie. It’s one school year and a complete story. This was an old screenplay that Jody [Hill] and I wrote back in 2006. But we needed it to be longer so we added and reworked it and broke it up into 18 segments. HBO trusted us to make those episodes without anyone watching them, so they really, really trust us”